I have to admit that I have an absolute love for Yule holiday traditions and stories, especially ones that play with and complicate traditional narratives. There is something otherworldly about the holidays and they inspire a need to read – particularly for those of us in the Northern hemisphere during Yule. The shorter days and longer nights call out for a need for hope and light, so reading optimistic holiday tales can evoke that feeling of hope in the long, long nights.

The second instalment in Grant Morrison and Dan Mora’s Klaus graphic series, Klaus: The New Adventures of Santa Claus continues Morrison and Mora’s re-exploration of this reimagining of the Santa Claus figure. But where Santa was a jolly old man with a round little belly that shook when he laughed like a bowl full of jelly, Morrison and Mora’s Santa Claus is a muscular middle aged man who seems to spend more time at the gym than he does eating milk and cookies. Klaus is a warrior figure, set against the tides of darkness that spring up around Yule, whose role is to fight evil… but also inspire hope and caring in children.

Klaus is fully steeped in Norse mythology, formed at the combination of the Joy rune, the Gift rune, and the Fire rune. He is a newly imagined figure who is steeped in the pagan origins of Yule and connected to other traditions like the Yule Lads of Iceland, the Yule Goat of Scandinavia, Ded Moroz of Russia, and the Frost Giants of Norse myth. Instead of reindeer, this Santa Claus is accompanied by wolves. Yet, Mora and Morrison don’t just play with the idea of a magical Santa. He is also steeped in technology, riding a sleigh that looks like it is part space ship and occasionally fighting aliens.

Klaus: the New Adventures of Santa Claus occurs in two narratives – “Klaus and the Witch of Winter” and “Klaus and the Crisis in Xmasville”. Klaus’ encounter with the Witch of Winter involves a battle against forces of cold with hints of The Snow Queen (especially through the notion of children developing a frozen heart), but the tale also connects Klaus to other tales, making this Santa Claus the teacher of Geppetto (from the tale of Pinocchio). This tale brings up concerns about global warming, ideas of family, and the psychological trauma that children undergo.

“Klaus and the Crisis in Xmasville” is similarly charged with magic and political commentary. In this story, Morrison and Mora explore the influence of Coca Cola in shaping the image of modern Santa Claus and his capitalist trappings. Using the name “Pola Cola”, Morrison and Mora point out things like the exploitation of workers and the power of economy to turn people into zombie-like figures, but they also combine this with Klaus’ battle against a werewolf-like figure and aliens from another planet who are trying to suck all of the creativity out of human beings because they don’t have any of their own.

Morrison and Mora have created a new mythology with Klaus, modifying the traditional image of Santa Claus and combining him with another creation of popular culture – the superhero.

To find out more about Grant Morrison, go to https://www.grantmorrison.com

To discover more about Klaus, go to https://shop.boom-studios.com/series/detail/458/klaus 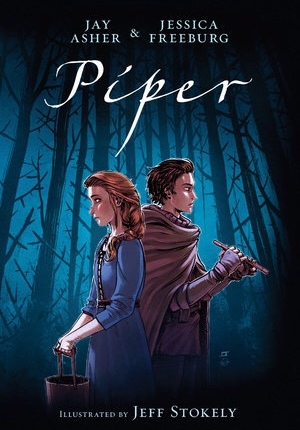 Saved from the Music 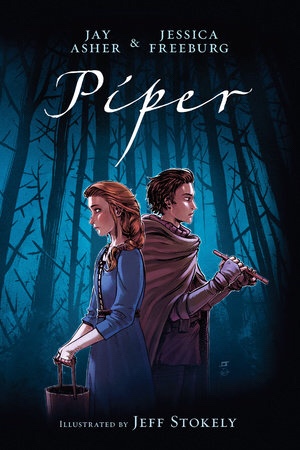 Fairy tales have frequently invoked disability, often using the disabled body as a motivating point for stories of change and transformation. Jay Asher and Jessica Freeburg’s graphic novel Piper explores the question of what would happen if the Pied Piper of Hamelin encountered a young woman who is Deaf and therefore couldn’t hear the allure of his magical pipe. Maggie, a young Deaf woman who has been ostracised by her village, becomes a foil for the Pied Piper, a person who has a strength that counters that of the Pied Piper. She has the ability to resist control because of being Deaf.

Maggie became Deaf when children put her in a barrel when she was a child and throughout her life she experienced ostracism and violence from the rest of her community. When the Piper arrives in her town, the first thing he notices is the prevalence of violence and oppression in the community and the power that those in positions of authority or wealth exert over the rest of the community. He notices that the town has a rat infestation, which is has the ability to counter with his ability to summon rats with his pipe, but he also reads the imbalance of power in the town and wants vengeance for those who are attacked by the community. His own father died as a result of violence from a community that ostracized him and this has left the Piper aware of the violence that ostracism can visit on those who don’t conform.

Asher and Freeburg give us a modified version of the tale, giving further context to why the Piper eventually lures all of the children away from the village beyond the fact that the town doesn’t pay him for removing all of the rats.

The tale evokes disability again when the kidnapping of the village’s children is discovered after a disabled child is unable to keep up with the rest of the children and therefore escapes the Piper’s abduction, therefore situating this tale as one that uses disability and Deafness as symbolic media within the context of the tale, associating bodily difference as a way to demonstrate the town of Hamelin’s abuse toward disempowered groups.

This is also a fairy tale within a fairy tale since Maggie creates stories about those who have been violent toward her. She shifts the narratives that are imposed on her and remakes herself into a position of power by retelling her experiences as fairy tales. Ultimately, she shifts the tale of the Piper of Hamelin, her own tale, in order to modify it, remaking the story into the one that is familiar from legend and obscuring the reality of the tale.

To find out more about Piper, visit https://www.penguinrandomhouse.com/books/539282/piper-by-jay-asher-and-jessica-freeburg-illustrated-by-jeff-stokely/9780448493664/ 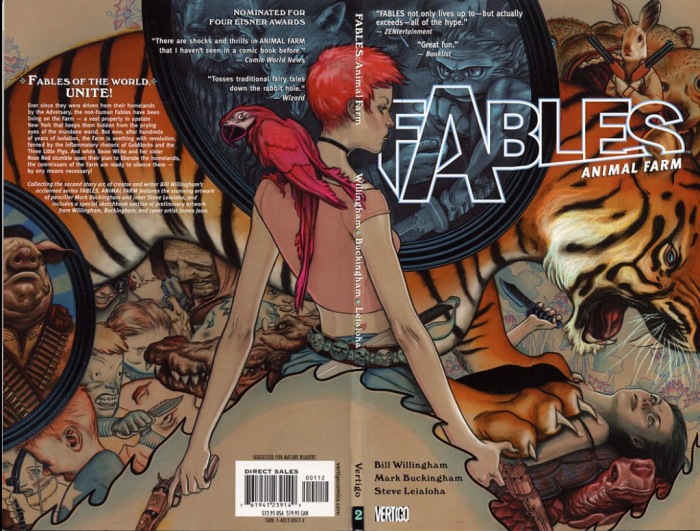 The second volume in in the “Fables” comic book series, “Fables: Animal Farm” introduces us to the fairy tale characters that can’t pass in the human world. Whether giants, talking pigs, Puss in Boots, flying monkeys, or trolls, the fairy tale characters who passed into the human world and are unable to pass as human are confined to a small village away from human civilization, deprived of common rights of movement, and limited in the activities they can participate in.

Feeling treated as second class citizens, many of the residents of The Farm want to challenge a system that divides characters by appearance. But, these beings from fairy tales of the past are integrated into a tale of the present as George Orwell’s “Animal Farm” becomes a modern text that weaves into this tale of exploitation and class difference. Like in Orwell’s tale, certain residents of The Farm decide that they can exploit the anger that the residents all have over being treated as second class citizens in order to take over their society.

“Fables: Animal Farm” explores ideas of class conflict, but it also interrogates ideas of segregation of certain populations, and the residents of The Farm remind the reader (and the human-looking fairy tale characters) that no matter how good the buildings are in a segregated community, it is still a prison when you are unable to leave. There is a commentary here on other institutions that segregate disabled populations or aged populations from an able-bodied population that consistently expresses a desire not to see people with disabilities or the aged. The residents of The Farm are similarly hidden from sight, removed from social interaction, and isolated. Indeed, they represent their isolation by playing on William Golding’s Lord of the Flies by slaughtering one of the Three Little Pigs and placing his head on a pike. The characters use this symbolism to illustrate that their isolation, rather than their bodies, have transformed them into animals and monsters.

In “Fables: Animal Farm” Willingham, Buckingham, and Leialoha illustrate that texts have power, and, particularly, that they ask social questions. Mixing fairy tales with some of the social commentary from Orwell and Golding’s tales, “Fables: Animal Farm” reminds readers that fairy tales and other stories that we tell ourselves are our way to understand our place in the world and that tales should be revisited because every time we revisit them, we observe something new and relevant.

To find out more about the Fables series, visit Vertigo at http://www.vertigocomics.com/graphic-novels/fables-vol-2-animal-farm&nbsp;

“Grimm Fairy Tales Presents The Little Mermaid” was initially a bit off-putting since the art seemed to mirror the comic book exploitation of women’s bodies, but Brusha, Finch, and Mendonca present a Little Mermaid tale that explores the clash of science and fairy tale. Erica, the mermaid, has spent her life uncertain about her background or parentage, but she knows that she is able to take the form of either mermaid or human. Her destiny and identity are taken away from her by scientists who seek to unravel the magic of her body to adapt it for military purposes. Her body ceases to be a vessel of magic and becomes a vessel of war as her biological uniqueness is spread to others.

Erica finds herself caught between worlds as the armies of Atlantis clash with the scientifically constructed creatures of the surface.

Like Hans Christian Andersen’s tale, Zenescope’s comic is a tale of fluidity, of change with a mermaid trapped between worlds and identities, seeking out an understanding of herself and her position in a world that has been torn in two. This is a story of science clashing with magic, medicine colliding with wishes, and above all, it is a story about uncertainty.

The graphic medium of the story allows for an exploration of the physicality of the mermaid, illustrating Erica’s transformation between forms and the horror that runs like a tide through this story of different types of embodiment.