A Krampus-fur Dress for Cinderella

A Krampus-fur Dress for Cinderella

A review of Steven Grimm’s “Villainess Ascending” in He Sees You When He’s Creepin’: Tales of Krampus (World Weaver Press, 2016) 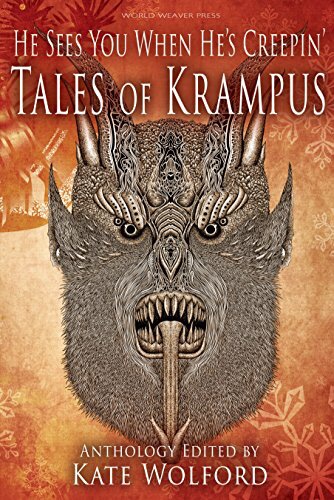 Folklore and fairy tale collide in Steven Grimm’s “Villainess Ascending”, a tale that adds a monstrous twist to the tale of Cinderella. Grimm begins his story with the mythology that there have been multiple past Cinderellas and this one has gone through the same things as the others – a dead devoted mother, a remarried father, a stepmother and two stepsisters and like the other Cinderellas, this one doesn’t want a life of domestic servitude. Yet, Grimm adds a twist to the tale, setting the Prince’s ball near Krampusnacht, a time when the Austrian devil of Christmas, Krampus, is out prowling the world for people in need of punishment.

Krampus and Cinderella have something in common. They both want justice… and the punishment of those they view as wicked and Grimm intertwines their narratives in a way that adds nuance to both the folklore of Krampus and the fairy tale of Cinderella. Grimm’s tale draws on other figures from Austrian holiday legends as well, bringing in Frau Holle and Frau Perchta. Frau Holle (about whom the Grimm Brothers have also written a fairy tale) is able to bring on snowfall by shaking out her bedding and her tales generally revolve around rewarding people for hard work and punishing people for laziness. Frau Perchta has a more sinister presence in Austrian folklore and is generally portrayed as having two faces – one kind and gentle and the other demonic. During the yule holidays, she shows her good face to good children and gives them treats… but shows her demonic face to naughty children to punish them. Frequently she is portrayed slitting open the bellies of children, removing their organs, and filling their bodies with pebbles and straw. Steven Grimm’s Perchta isn’t quite as terrifying though she is connected to Krampus. Instead, she is a force of nature with otherworldly magical powers and an interest in seeing humanity become good rather than corrupt.

“Villainess Ascending” is a tale about the damage that patriarchy does to humanity. It is a story about the way that patriarchy has taken away rights from women and has often only allowed women success in the world through marriage rather than through their own skills and abilities. Steven Grimm’s story focusses on the messages in the Cinderella tale about beauty meaning success, about the only way for women to rescue themselves from poverty is through marriage to a rich man, and about the intentional toxicity of the prince’s ball and generating jealousy between women.

Grimm subverts the simple idea of the punishment of the wicked by pointing out that “wickedness” has social roots and is created by social structures that damage people in oppressed groups.

To find out more about He Sees You When He’s Creepin’: Tales of Krampus, visit https://www.worldweaverpress.com/store/p121/He_Sees_You_When_He%27s_Creepin%27%3A_Tales_of_Krampus.html

dereknewmanstille Derek (they/them) is a PhD ABD in Canadian Studies at the Frost Centre for Canadian Studies, Trent University. Derek's research is focussed on representations of disability and alterity in Canadian Speculative Fiction. Derek is a 9 time Prix Aurora Award winner for their website and associated radio show Speculating Canada.
Published December 13, 2018